Rianne Ariëns, who is a teacher in The Netherlands, has been attending BELTA Day for five years now! She began attending as a student volunteer while studying Teacher Training at Thomas More Mechelen. When she graduated, she moved back to The Netherlands and got a job right away! Even though she is based in The Netherlands, she has come in for the weekend of BELTA Day for the last two years. This year, Rianne joined the BELTA Board as its youngest member! Here is her blog post about the one and only session she was able to attend at BELTA Day 2018. This post originally appeared on her blog, Tales of a Young Teacher, which you can find here: http://www.thetalesofayoungteacher.nl. 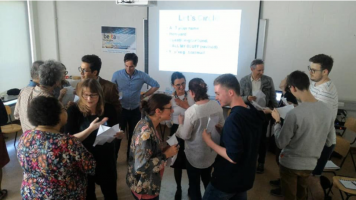 Today I want to talk about a great workshop I attended during the 6th Annual BELTA Day. Now as a board member, I couldn’t attend as many sessions as I did in the previous years; in fact I only attended one. But let me tell you, it definitely did not disappoint!

The session I attended was given by Tatiana Shayan from Ukraine and it was all about playing circle games in class. As it was a workshop, we ended up exploring these circle games ourselves, which was a lot of fun. Tatiana explained that circle games can incite some negative feelings in your students; they are likely to feel a little exposed and insecure. However, with the right attitude and firm rules this can be resolved. Tatiana went on to say that circle games can be used in many ways within the classroom, as ice breakers, introductions or fillers. Most importantly though is that playing circle games is fun and relaxing and they can boost your student’s confidence and wellbeing.

During the workshop Tatiana introduced us to several circle games; the first one was an introduction game that you can use to help your students remember each other’s names. Now as opposed to the traditional name game where students have to add an adjective to their name, this game required no additional language. The students stand in a circle and make a gesture when saying their name. The other students in the circle take turns repeating this gesture and the original student’s name. When everyone has had a go the teacher makes one of the gestures and all the students need to figure out which name was attached to that particular gesture. It’s really entertaining, and it will make learning each other’s name quite easy.

The second game is called “hen house”, this is a game that you can use to help students with difficult words, both with remembering and pronouncing them. Now what happens is that the teacher explains the exercise to the group; she lets them choose a word, something with multiple syllables, and they divide it up. Group one says only the first syllable, group two only the second and group three only the third. At the count of three the groups start to simultaneously chant their given syllable. The teacher lets the students try this a couple of times. She then asks for a volunteer to step out of the room. When the volunteer has left the group comes up with a different word (preferably one that they have been introduced to) she assigns each group a syllable. When the volunteer re-enters the room, the students begin chanting their given syllable. It’s up to the volunteer to walk around the room and try to puzzle out which word is being said. This exercise was a lot of fun but also quite challenging. I volunteered to leave the room and it really takes some focus to figure out which word is being said. Not only does the game help your students understand what a syllable is, it’s also great for word recognition and for practicing pronunciation. All in all, a great game to end a vocabulary lesson with!

The next game was also vocabulary based, and it requires the students to work in pairs. Each pair is given a difficult word that they haven’t studied yet. Next to the word are options a, b and c. One of the options contains the correct definition of the word, the other two options are blank. The students have to come up with their own (believable) definitions of the word and have a couple of minutes to do so. When everyone is done, the pairs take turns sharing their words and the three definitions with the class. The class has to guess which definition is the correct one.

The fourth and fifth game were both aimed at speaking skills. The fourth requires the students to write down a question on a piece of paper, fold the paper and give it to the teacher. The teacher puts all of the folded papers in a glass jar and passes the jar round the circle. All the while music is playing in the background. When the music stops the person holding the jar has to take out one question, read it aloud and try to answer it. Other students are allowed to chime in with their answers as well. This game is great to informally talk- and encourage discussions in the target language.

The fifth and final game involves writing down a secret on a piece of paper, then folding the paper into a paper plane. When everyone is finished the teacher counts to three and the students throw their planes into the middle of the circle. Then they have to get up and retrieve a random paper plane. They read the secret and then walk around the room asking their fellow classmates indirect questions in order to find which student the secret belongs to. For example, if the secret is “I don’t like Brussel sprouts” the student has to ask questions like “Is there any food you don’t like?” “Is there a vegetable you hate?” etc. They are not allowed to ask, “Do you dislike Brussel sprouts?”

I had a lot of fun attending Tatiana’s workshop and trying out all these different games and based on all the happy faces I saw during the session itself I wasn’t the only one. Tatiana’s session really drove home what BELTA day is supposed to be all about: good and practical ideas that teachers can take home with them and implement in their own lessons. I also had the great pleasure of getting to know Tatiana a little better during the conference and she is absolutely lovely! So passionate and enthusiastic about what she does and unendingly positive. I really hope that she’ll come back to BELTA Day in the future because I’m sure there’s a lot more we can learn from her!